Remember the date: September 17, 2018. This is the day when your Apple gadget got an opportunity to become faster and smoother at work. The new mobile operating system iOS 12 was released, and this event significantly changes the Apple experience on the whole.

The most important thing is: the latest Apple OS is available even on some of the oldest devices. iOS 12 is equally suitable for the iPhone starting from iPhone 5s (released in 2013) to iPhone X, for iPad from iPad mini 2 to iPad (2018), and iPod touch as well. So the device that runs iOS 11 can run successfully iOS 12. 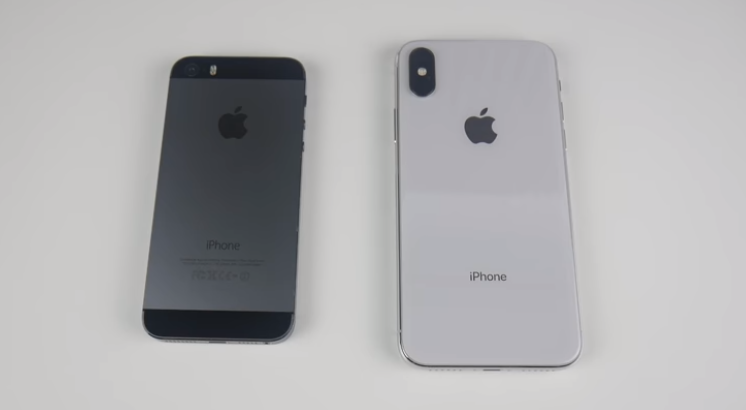 iOS 12 delivers a good deal of brand new features supported by the top speed of performance. It is already available for launch, and we have a list of convincing reasons why you should do it immediately.

iOS 12 is the fastest operating system from Apple ever! These are not just empty words to reassure you that the Apple developers’ work is not in vain. We have concrete numbers to prove you this fact: 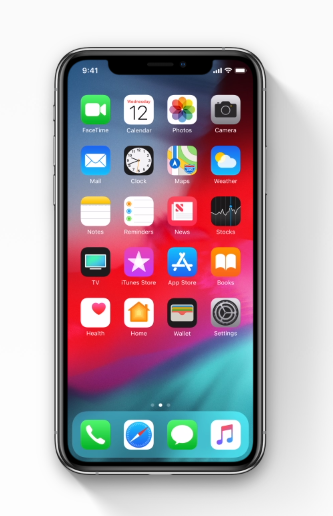 In comparison with the unsuccessful iOS 11, the latest iOS is two times faster and productive and speeds up even the oldest iPhone and iPad models.

Moreover, the Apple developers accelerated the animation of most actions. So the overall experience of using your device will significantly advance. Even the QuickType keyboard improved and now shows its maximum speed.

Emoji, animoji, memoji, and all that jazz

iOS 12 takes care of your gadget productivity as well as of your excellent mood. The plethora of old good and brand new animoji and memoji is delivered with iOS 12.

Just take a look at new animoji with a koala, tiger, ghost, and tyrannosaurus. Aren’t they perfect for expressing your emotions? These new iOS 12 animoji are incredibly accurate regarding facial expressions and even the tongue movements. 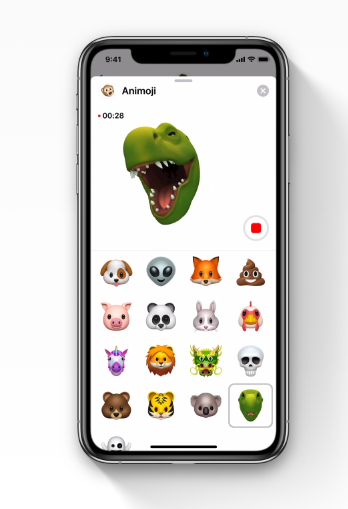 Animoji became more convenient to choose: just swipe to the left or the right on their horizontal panel or open the whole list of them for selection.

With iOS 12, you can record video from animoji for 30 seconds. Previously Apple gadgets offered only a 10-seconds time interval for animoji clips.

With the editor in the Messages application, you can create an emoticon very similar to your face. This is the memoji editor with hundreds of different facial parts and accessories which allows recreating the user’s appearance entirely. It is much funnier to use your personal memoji instead of animoji when chatting with friends. And iOS 12 gives you unlimited freedom of creating emoticons.

In iOS 12, users can share stickers, animoji, and memoji in FaceTime. Imagine, you have a FaceTime call and can make a cartoonish character appear in front of your friend at any moment. What a fascinating prospect! 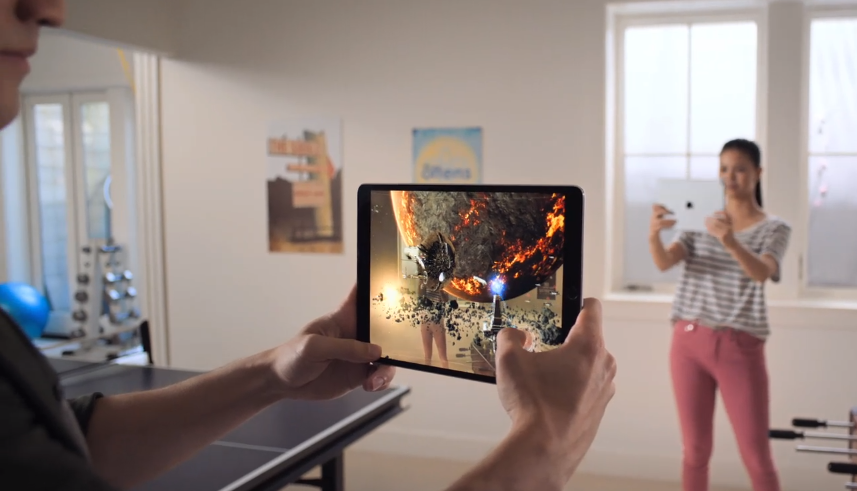 The improved Augmented Reality platform ARKit 2.0 is going to launch soon after the iOS 12 release. This updated AR platform is meant to bring the impressive technology to Apple games and applications and make their use interactive and accessible simultaneously for several users.

ARKit 2.0 opens the sight on the augmented reality objects from different angles, which dramatically increases the capabilities of applications.

For example, with the new AR application Roulette, users can measure the size of any object by merely pointing the camera on it and fixing it with two virtual dots. As a result, you get the most accurate measurement.

For those addicted to their Apple smartphone or tablet, iOS 12 prepared a special surprise. Screen Time function is a perfect tool for controlling your activities with your gadget. How much time do you spend on Instagram? What is your most used application? Screen Time will answer these and many questions like that.

You will easily unravel the mystery of your unproductivity during the day with the statistics fixated by Screen Time. Watch your daily or weekly reports to understand what takes most of your time on the screen. 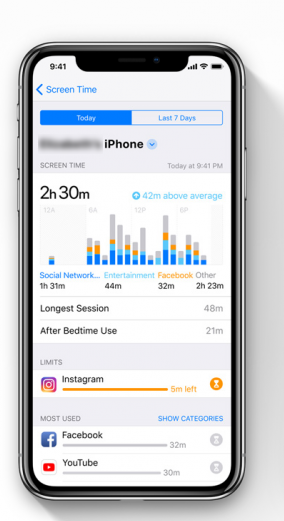 Moreover, you will be able to control the undesired consequences of over-using your gadget: simply set restrictions on specific activities and stop wasting so much time on scrolling the application feed or gaming.

Screen Time lets you determine the maximum time for the use of a particular application or block it entirely for the defined period or one specific schedule. To recognize the blocked apps, look for the hourglass to appear on its icon.

This feature is not only your personal salvation from addiction but your kids’ as well. Screen Time lets you set the parental control and avoid the unwelcome children activity with their gadgets.

iOS 12 must be the safest mobile operating system in terms of privacy and security. From now browser Safari will prevent the appearance of Like and Share buttons on the site to keep your guard from tracking. The system for protecting users from data collection by websites is also on with iOS 12. Thus your Safari-surfing will be safe as never before. And it will not show you target ads anymore! 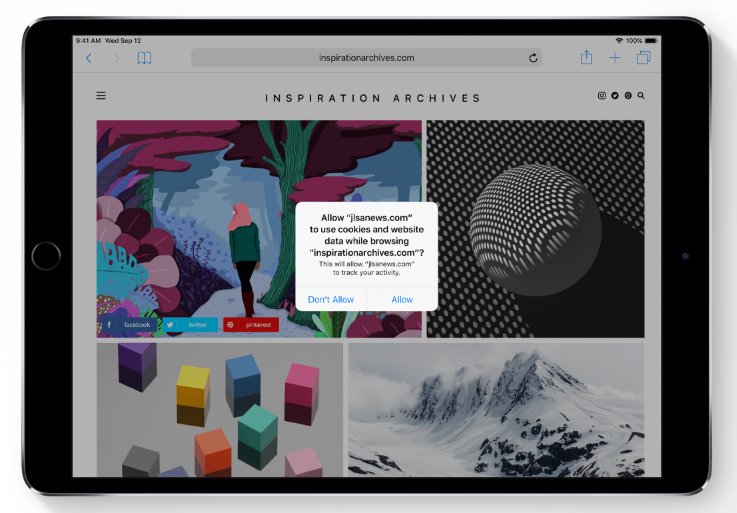 Another feature regarding security is simplifying of the password management on your device. iOS 12 watches your passwords to be reliable and unduplicated for different sites and services. All of the password combinations will be saved to the iCloud Keychain for the convenience of use and their protection.

In iOS 12, the highly-secured 256-bit AES for encryption is used for protecting all kinds of data. The US government uses the same type of encryption, so it is almost impossible to crack.

It seems Apple is deeply concerned with the security issue. So iOS 12 got its top level of safety.

In iOS 12, even the Do Not Disturb mode gets better than before. There are more flexible settings for this mode like enabling only for an hour, before the end of the current event from the Calendar or before leaving the current geo position.

In the update, Do Not Disturb mode gets a special sub-mode Going to sleep. It is activated simultaneously with the main mode and excludes entirely the appearance of notifications on the iPhone and iPad in the hours set for rest. 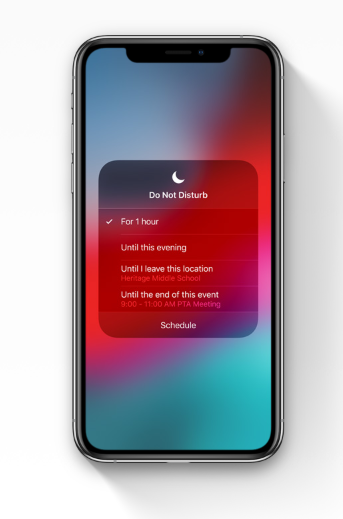 The incoming notifications won’t be blocked but simply not shown up during your sleep time. When the iPhone or iPad is removed from the Sleeping mode, all alerts will appear in the Notification Center chronologically.

When you turn on the Do Not Disturb mode without notifications, a new animation is played on the iPhone and iPad. The display of the device gradually darkens, clearly showing that the mode is on. The same blackout is also applied to the entire Notification Center. The background of all notifications becomes darker, but the text remains readable.

So, iOS 12 delivers the best features regarding the speed and performance, security and activities control, augmented reality tools and emoticons entertainment. But this list of exceptional features is much broader.

With the launch of iOS 12, the significant changes touched Siri, Photos, Notifications, battery information, settings for most of the apps, and many other aspects of using the devices.

The possibilities of iPhones, iPads, and even the latest iPods extended so far. Many users have already given their positive reviews on the newest iOS.

Still asking if iOS 12 is the best thing that could happen to your Apple gadget. Probably, yes. So there is no need to hesitate with launching iOS 12 on your smartphone or tablet. Prepare to brand new user experience and launch!

Your comment is awaiting moderation. We save your draft here